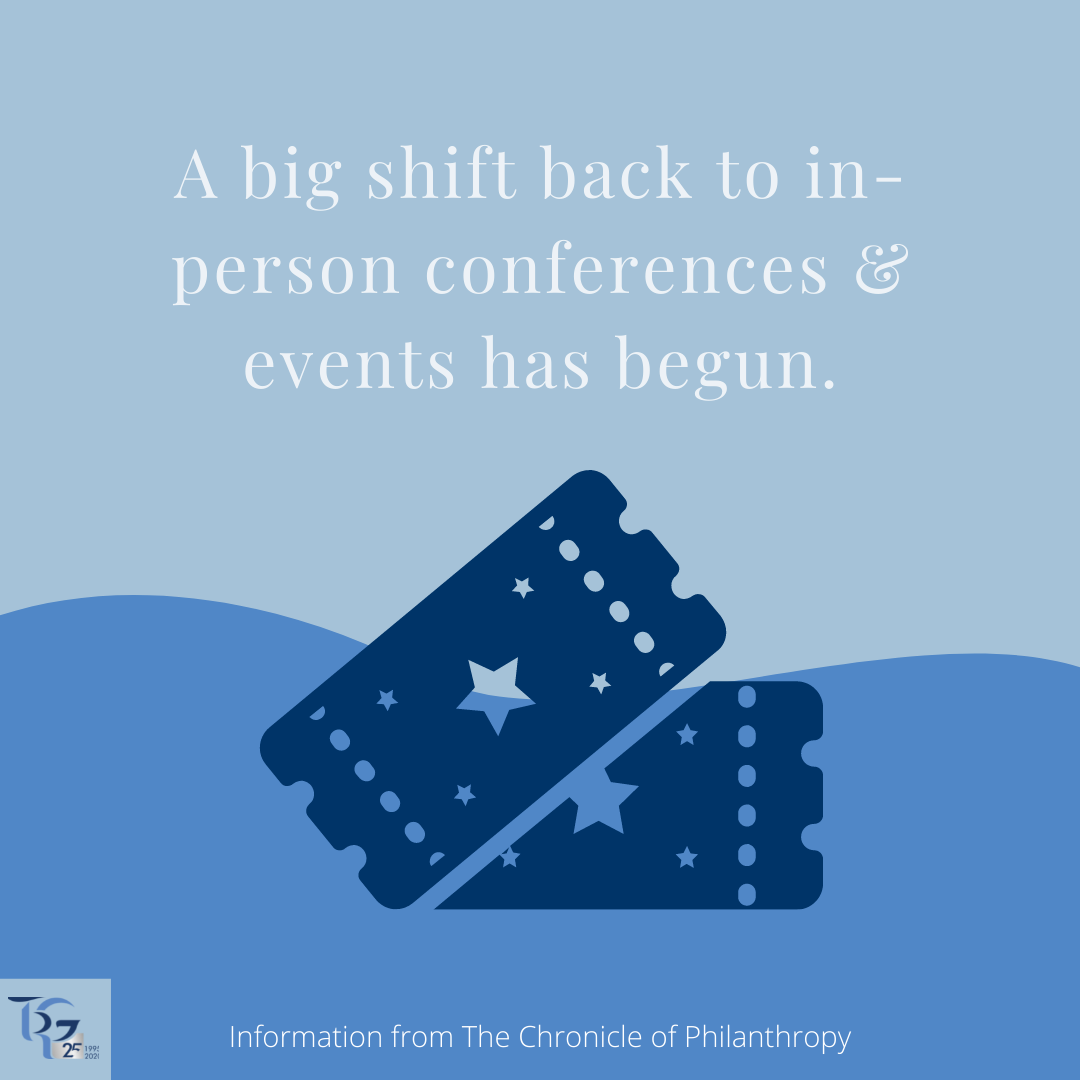 From The Chronicle of Philanthropy By Dan Parks MARCH 3, 2022

The year 2022 is going to be a whole new ball game for Diana Lara and her Southern California nonprofit Food Finders, which collects and distributes food that was otherwise headed for the trash.

In May, Lara is going to the Food Waste Solutions Summit in Minneapolis, her first live conference since the pandemic struck. And after a two-year hiatus, her nonprofit is planning the return this year of its annual in-person fall fundraising event in September.

Lara says she’s a little nervous about both events, but she and her staff are ready to get back to something approaching normal. “We are looking forward to getting our donors together,” she says. “Everybody is really excited about it.”

Across the country, nonprofits are gearing up for the return of in-person conferences, fundraising events, and other gatherings. Despite much talk during the last two years about virtual networking and fundraising events being here to stay, experts say that groups suddenly are in a rush to return to in-person gatherings.

What’s more, most are not bothering with hybrid events, where attendees can choose a virtual or in-person option, because they want to focus their resources on providing the best in-person experience possible, says Reggie Rivers, president of the Denver-based Gala Team, a group that conducts both live and virtual auctions for nonprofits.

Live events are sprouting up fast in recent months, says Rivers. “We’ve already done about 10 events,” he says. “It’s about as normal as you can imagine. It shocks me.”

A big shift back to in-person events started several months ago, says Rivers. “The whole fall ended up being almost all in-person,” he says. “It was like flipping a switch.”

Of course, nonprofits are still being careful. They are requiring proof of vaccination status, a recent negative Covid test, or both, says Rivers. However, masks often are optional, he says.

“We haven’t had an event yet that required masks this calendar year,” Rivers says.

“They are loud, and they are rambunctious. Nonprofits have to think about that and plan for it.”

Rivers said that just a few months ago he expected a surge of hybrid events in 2022, but it hasn’t happened. ”Most of our nonprofits just don’t want it,” he says.

After a two-year hiatus, the Association of Fundraising Professionals annual live conference returns May 2-4, at the MGM Grand hotel in Las Vegas. It will not include a virtual component, although video recordings of most sessions will be available after the conference. Fundraising Day in New York also returns to an in-person event this year, on June 17 at the Marriott Marquis Times Square.

NTEN’s Nonprofit Technology Conference on March 23-25 will be virtual again this year, although the organizations says it plans to return to an in-person event next year in Denver.

Some things have changed, though, as in-person events resume. Long workshop sessions and speeches aren’t going over well, says Rivers, because people are so eager to network and simply chat with colleagues. Their attention spans are significantly shorter, he says.

“They are loud, and they are rambunctious,” says Rivers. “Nonprofits have to think about that and plan for it.”

He adds, “Shorter is better.”

Kelley Kuhn, CEO of the Michigan Nonprofit Association, says she’s also seeing a big return of in-person events, including the Council of Michigan Foundations in November at the Amway Grand Plaza Hotel in Grand Rapids.

“People are still excited about the work, and they miss the in-person interaction,” she says.

Kuhn says the in-person events she’s seeing so far have all been indoors, although she expects some organizations to take advantage of the upcoming warmer months to hold outdoor events.

Kuhn says some nervousness about live events remains, especially among people with children under the age of 5, who cannot yet get vaccinated.

Independent Sector CEO Dan Cardinali says his organization will stick with virtual events through 2022 while making plans for a return to hybrid events in 2023, which the organization was doing even before the pandemic.

Cardinali says the pandemic taught a lot of nonprofits how to “democratize” access by making events accessible to people who can’t or don’t want to travel. However, Cardinali acknowledges that for many groups, trying to pull off a high-quality hybrid event may be too big a task, so focusing on the in-person event makes sense.

“That’s a very disciplined and smart move — be good at what you are going to be good at,” he says. “People are just hungry to get together.”

Shannon McCracken, CEO of the Nonprofit Alliance, attended the Faith and Fundraising Conference in late February in Milwaukee, which her organization co-sponsored. The event was in-person and indoors at the Hilton City Center, with no virtual option. A nurse checked all attendees for proof of vaccination or a recent negative Covid test. Attendees wore masks indoors and had color-coded stickers on their name badges signaling their social distance comfort levels.

McCracken says people were thrilled with the opportunity to mingle with colleagues in person. “Oh my gosh yes, I can’t get over it,” she says.

She says she noticed a lot of chatter on the conference app about people gathering outside the conference to go for a run or a walk or a tour of the city to take photos. Or as McCracken calls it, “Great stuff that’s just about being back with friends and community.”

Lara of Food Finders says that the virtual events her nonprofit held during the pandemic were helpful, but they couldn’t generate as much interest or income as live events — especially since those live events typically featured food tastings prepared by prominent chefs.

“We had attendance, but it just wasn’t the same,” she says.

Food Finders is making some adjustments, including holding its September fundraiser outdoors, something the group never would have considered before the pandemic, she says.

Despite all the excitement about getting back to normal, Lara acknowledges she’s a little nervous about her organization’s return to live events — and her own upcoming travel to a conference in May.

“If we get another Covid variant as it comes closer to that time, I probably will not go,” she says.