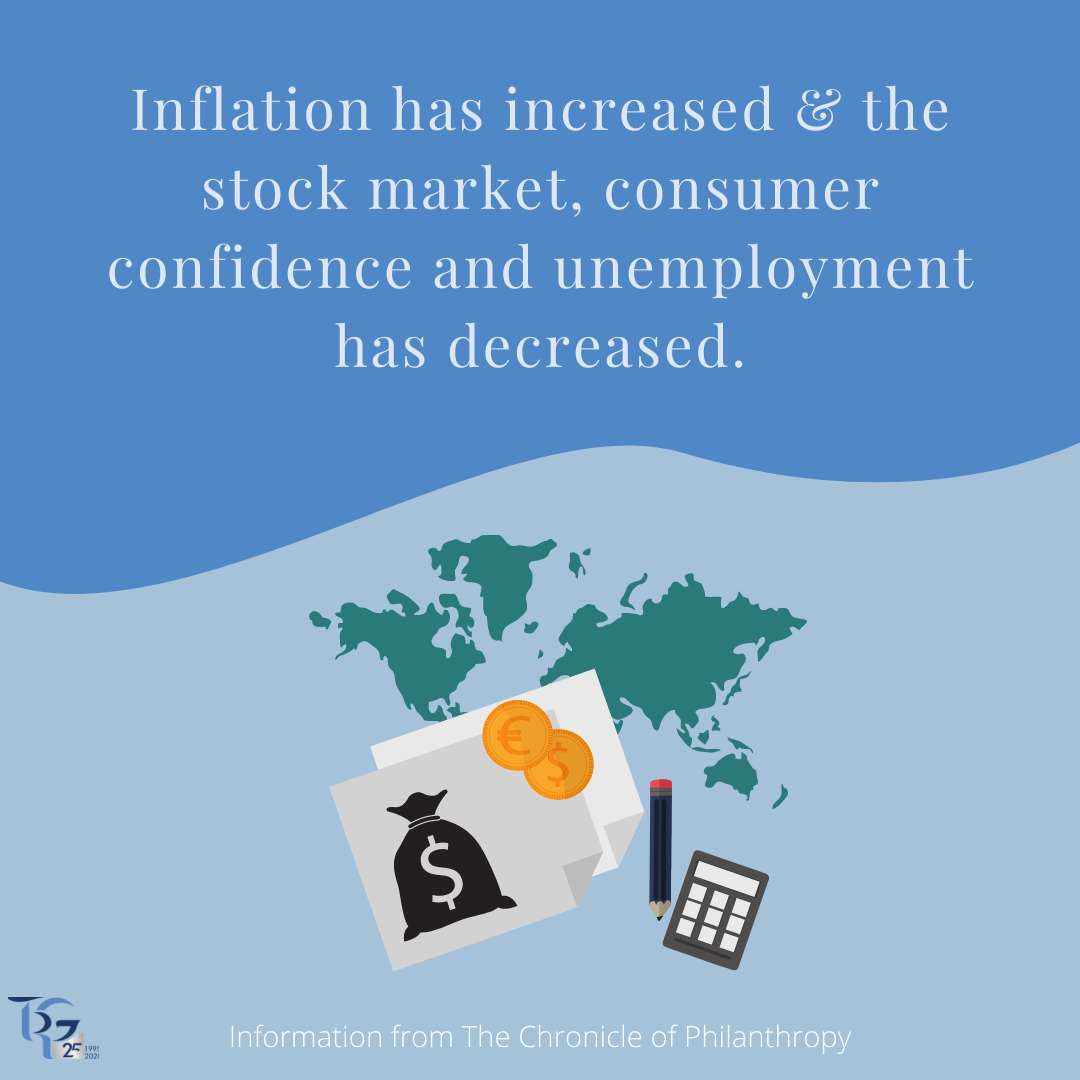 From The Chronicle of Philanthropy By Dan Parks MARCH 15, 2022

A raft of troubling economic developments — stubborn inflation, a bear market for stocks, and sagging consumer confidence — have clouded the environment for nonprofits just as they were looking ahead to a brighter year as the Covid pandemic wanes.

Jody Levison-Johnson, CEO of Social Current, a coalition of social-service nonprofits, state associations, foundations, and for-profit entities, called the situation “a fiscal cliff” for nonprofits. Demand for services remains high, she said, with no noticeable drop-off even as the pandemic wanes, and at the same time inflation is straining nonprofits’ budgets.

To cope with the fiscal crunch, nonprofits are closing programs, turning away people in need, or creating waiting lists for prospective new clients, she said.

“I feel like it’s still the constant crush that started with the pandemic,” Levison-Johnson said.

Michael Nilsen, vice president of marketing, communications, and public policy at the Association of Fundraising Professionals, said he was concerned that the latest economic developments will get in the way of efforts to attract private donations. Fundraisers have been eager to resume in-person events and face-to-face meetings with big donors, he noted.

“Now we’ve got Ukraine and gas prices, and fundraisers are like, You’ve got to be kidding me. Now what?” Nilsen said. “It’s certainly going to be a challenging time and not what we were hoping for coming out of the pandemic.”

He added: “Emergencies and crises can raise lots of money, but how often can you go to that well?”

However, Nilsen also said there was cause for optimism. If inflation is tamed within a few months, it could go a long way toward lifting the cloud of uncertainty hanging over many donors as they decide how much to give. The key is to get the situation turned around within the next four to six months, before the crucial year-end giving push begins in earnest, Nilsen said.

The annualized inflation rate hit 7.9 percent in February, the highest since 1982. The increase was driven primarily by soaring energy costs linked to Russia’s invasion of Ukraine.

Levison-Johnson said inflation is exerting pressure on social-service providers and their workers. Many of those employees are looking for better-paying jobs as inflation eats into their buying power, and nonprofits with tight budgets are struggling to find ways to retain them. For example, one nonprofit in her organization’s network recently gave out $100 gas gift cards to employees who transport clients as part of their work, Levison-Johnson said.

Those kinds of measures help, but they’re not enough to fully offset the financial pressures facing many low-paid nonprofit workers, she said. “It was all they could do, but it was some acknowledgment of what this work force is facing,” Levison-Johnson said. “It’s just untenable.”

Inflation has an impact on fundraising as well, particularly on small-dollar donors, Nilsen said. As family budgets get stretched thinner, gifts to charity are often among the first areas where people look to trim expenses.

Wages continued to rise in February, although only 0.03 percent for the month.

Volatility continues to rattle individuals who have stock-market investments After falling 6 percent in January, the S&P 500 slid another 3 percent in February. The trend for March so far continues to be downward over all.

Nilsen said the weakness in the stock market will have the most pronounced effect on midlevel and major donors, who may start to hold back a bit. However, experts note that wealthier donors are accustomed to riding out the ups and downs of the stock market, so short-term swoons are unlikely to have a big impact on giving behavior. Private foundations, whose endowments are usually heavily invested in the stock market, typically take a long view as well.

Consumer sentiment continues to fall as the shocks to the economy build, according to the University of Michigan’s Surveys of Consumers.

Preliminary results for March released Friday showed a 4.9 percent decline, to 59.7 on a 100-point scale, down from 62.8 in February and down 29.7 percent from a year ago.

“Consumers held very negative prospects for the economy, with the sole exception of the job market,” Richard Curtin, the chief economist for the survey, said in the March report. He added: “This underlying strength in jobs comes at the cost of pushing inflation even higher.”

Curtin also noted that “the greatest source of uncertainty is undoubtedly inflation and the potential impact of the Russian invasion of Ukraine.”

The decline in consumer confidence is likely to have the biggest impact on relatively small-dollar donors who are struggling to fit the cost of things like food and fuel into their monthly budgets.

The economy added 678,000 jobs in February, pushing the unemployment rate down to 3.8 percent, compared with 4 percent in January.

Payroll is the biggest expense for many nonprofits, and the cooling wage growth may eventually help nonprofits balance their budgets, but Levison-Johnson said that for now nonprofits continue to bleed workers as they seek higher pay elsewhere.