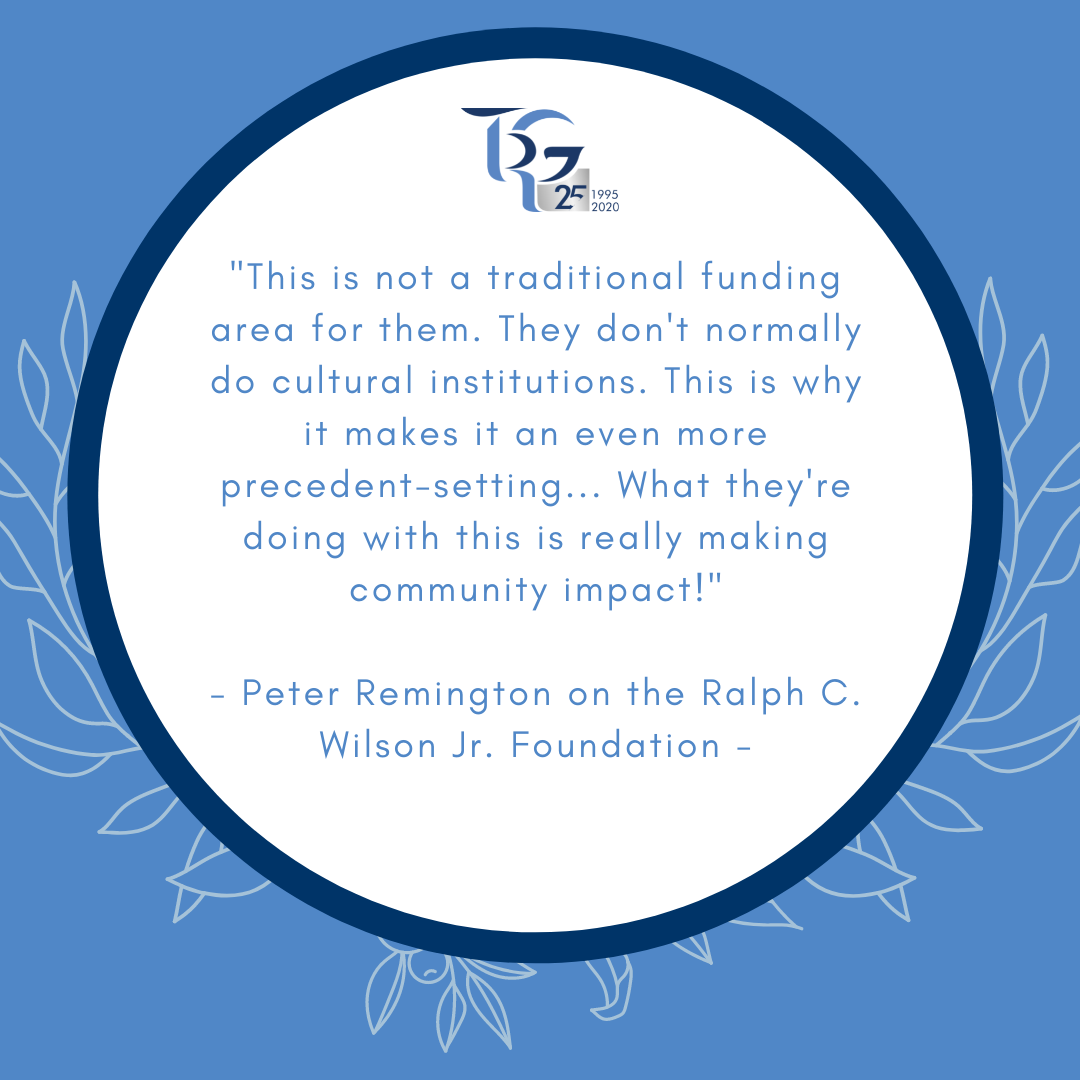 A $100 million gift by the Ralph C. Wilson, Jr. Foundation to provide longtime annual support to nearly a dozen arts and cultural institutions in southeast Michigan promises to be a game-changer, arts leaders say, creating a regular funding stream for their operations.

On Thursday morning, the Ralph C. Wilson, Jr. Foundation will publicly unveil its plans to donate $60 million over 10 years to create an endowment that would create permanent operational funding streams for 11 of the region’s most prominent arts and culture institutions. As the endowment is being funded, the foundation also plans to distribute $3.75 million annually over nine years to the same 11 organizations to allow for the “immediate impact on the sector and regional economy.”

“We hope this annual operating support will help to strengthen the financial condition of these institutions, allowing them to continue to develop creative, audience-centered initiatives that make them more inclusive, welcoming, and accessible places for all,” said David Egner, the foundation’s CEO.

The gifts are unique in that cultural groups don’t often get regular, annual undesignated funds to put toward operations like building expenses, staff and utilities, cultural leaders say. And the support also comes as museums and other cultural groups have struggled amid COVID-19, which required months-long closures and staff layoffs in some places.

It’s going “to make a world of difference for us,” said Elana Rugh, CEO of the Detroit Historical Society, which will get $200,000 annually to supplement a yearly operating budget of $3 million.

The Detroit Symphony Orchestra will get $700,000 annually. CEO Anne Parsons said a lot of organizations throw around the word “transformational,” but the Ralph C. Wilson, Jr. Foundation’s gift is. The DSO has an annual budget of $32.6 million and an endowment of roughly $70 million.

“It does two things for us — for nine years, this $700,000 of general operating support literally goes to employing our musicians and our staff and our stage crew, and all the part-time employees. That’s what general operating support does. And it supports our facilities,” Parsons said. “To get a gift of this size and have it promised over a nine-year period gives us a kind of stability I can’t remember witnessing at any institution in my time, and certainly not at the DSO.”

The DSO is one of 11 Metro Detroit museums and cultural institutions that will get annual gifts. The others include the Detroit Institute of Arts, the Charles H. Wright Museum of African American History, Michigan Opera Theatre, Michigan Science Center, the Motown Museum, The Henry Ford, the Holocaust Memorial Center and the Arab American National Museum.

“This will be one of the most significant gifts that we will receive annually,” said Nina Holden, the DIA’s chief development officer. “It’s a really wonderful statement of the foundation’s belief in our mission, and we’d consider, over the lifetime of the gift, that it’s a very transformational gift.”

The Ralph C. Wilson, Jr. Foundation also is dedicating $500,000 annually to support other arts and culture nonprofits, primarily of small to medium size, across seven counties in southeast Michigan.

And it’s pledged $5 million to the Motown Museum’s $55 million capital campaign to expand and renovate its facilities. The gift matches the biggest gifts the museum has received so far. The Motown Museum also will get $200,000 annually, the first sustained gift from a foundation to the museum in its history for operations and programming, said CEO Robin Terry: It’s “an investment in the future sustainability of our organization.”

Egner, CEO of the Ralph C. Wilson, Jr. Foundation, said the foundation is building on the work other area foundations have done but still leaves so many cultural institutions “always on a hamster wheel, they’re always trying to catch up.”

“It’s our hope that these annual gifts will lessen that burden more, and it will create greater self-sustainability, and it will be a stimulus for other people to join in giving in this sort of general operating endowment format,” he said.

The Detroit Historical Society’s Rugh can relate to that hamster wheel feeling.

“It’s been devastating. We lost over $1 million over the course of the pandemic,” she said. “Basically, you end up fundraising to make payroll. And that’s not great for the institution.”

Donors, meanwhile, often like to commit funds toward something “people can touch and feel,” so the incoming support from the Ralph C. Wilson, Jr. Foundation will really help, said Rabbi Eli Mayerfeld, CEO of the Holocaust Memorial Center in Farmington Hills. The center will receive $100,000 annually. It has a $4 million annual budget and serves about 100,000 visitors, both in person and through online programming.

It will “help the Holocaust Memorial Center stay the world-class facility that it is at the highest standards,” Mayerfeld said. “That’s an amazing thing. It gives us the ability to think about spending these dollars on things that are hard to fundraise for.”

The Ralph C. Wilson, Jr. Foundation’s $100 million commitment to the arts in southeast Michigan mirrors what it also plans to do in western New York, where it’s also donating $100 million.

The foundation was created by Wilson, the former owner of the Buffalo Bills. When he died in March 2014, assets from the sale of the team went to the foundation. At Wilson’s direction, the foundation’s $1.2 billion in assets are to be spent over the course of 20 years. That term expires Jan. 8, 2035, according to the foundation.

Peter Remington, founder and CEO of the Remington Group, a philanthropy consulting group, believes the Wilson Jr. Foundation is setting a precedent with its new arts initiative. The good and bad news of the rising financial markets in recent years is that “they keep having more money to give away.”

“This is not a traditional funding area for them,” Remington said. “They don’t normally do cultural institutions. This is why it makes it even more precedent-setting. … What they’re doing with this is really making community impact.”

What makes such gifts unusual, Remington said, is they’re going to organizations that range in size and impact and the funding can be put toward operating expenses — a benefit that can allow the institutions to focus their own fund-raising efforts on program development and long-term capital campaigns.

“Most of the time in history, they’re for specific things — programmatic or a chair,” Remington said. “This is certainly for Detroit, and I’ve been raising money in the arts for a lot of years, this is very, very unusual.”

Several art leaders say the gifts come at the perfect time, especially as the pandemic drags on. Some organizations applied for federal programs, such as a Shuttered Venues grant, to stay afloat during the pandemic.

Some patrons, meanwhile, are still hesitant about going to museums or to see the orchestra.

“There is some anxiety over ticket sales. Especially with the latest surge, even though we have very strict health and safety protocols, not everyone is going out,” said Parsons of the DSO. The new support from the Ralph C. Wilson, Jr. Foundation will relieve “some of the annual funds goal,” such as raises.

“It’ll help us with our ability to grow without worrying where is the money going to come?” she said. “… It will provide a kind of stability for us, knowing that’s coming in year after year.”

Neil Barclay at the Charles H. Wright museum, which will receive $300,000 annually and has a roughly $7.8 million budget, agrees: “It’s huge. It’s like having a gift that you know you’re going to get and can depend on every year. It’s so innovative of them to do it this way. A lot of time you may get a gift but it’s only for one year or two years. It doesn’t go on in perpetuity.”