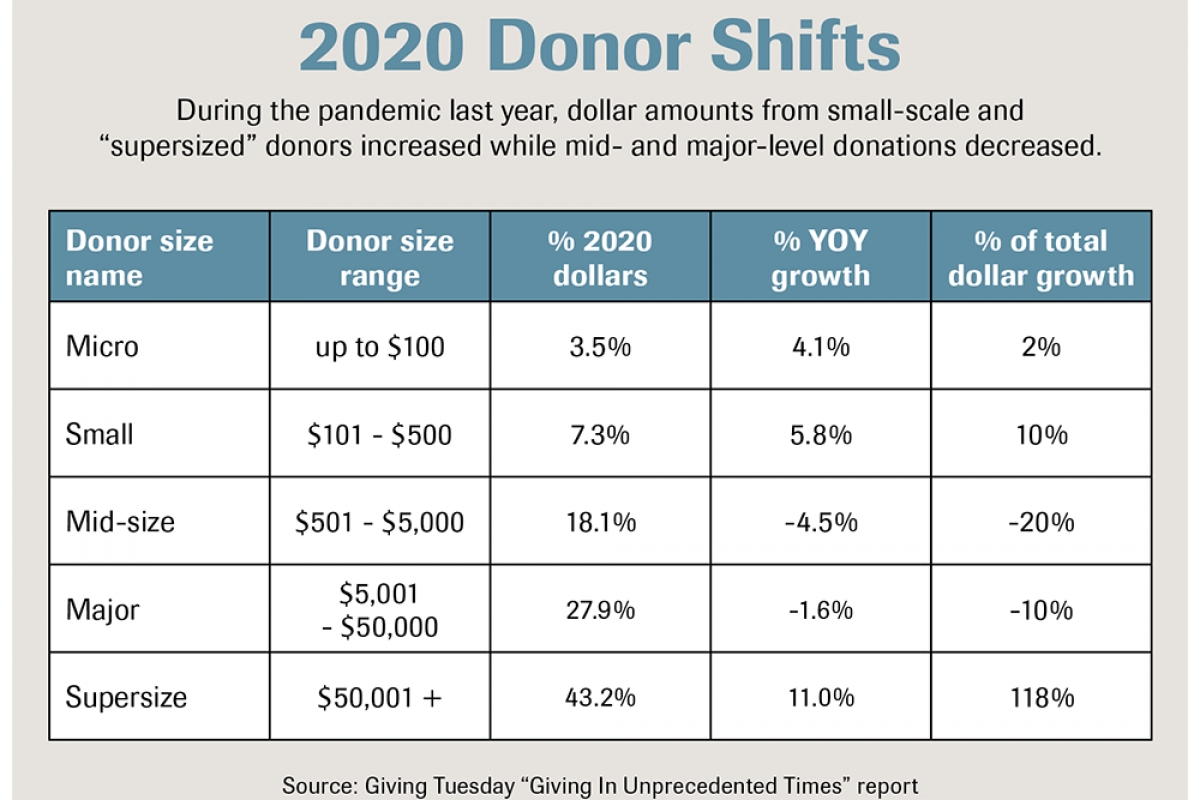 The Giving Tuesday Data Commons report released last month collected data from more than 100 contributing partners to identify 2020 U.S. giving trends that were reshaped by the pandemic. Unsurprisingly, the 2020 data reflect a tumultuous year for nonprofits.

The large growth in human services funding was a result of the public responding to the pandemic and racial justice issues. Heart of West Michigan United Way was a large benefactor of this trend.

“I think it’s important to recognize the response of this community and to donors during the pandemic. It was remarkable,” Michelle Van Dyke, president and CEO of Heart of West Michigan United Way, told MiBiz. “The $3.3 million that we raised for coronavirus response came not only from foundations and corporations, but from individuals all throughout this community. People stepped up in really big ways.”

The Giving Tuesday report showed a sharp increase in donations in April 2020 during the early stages of the pandemic. Fundraising then had a downward trend until October, when end-of-year donation dollars increased.

Authors of the report expect giving trends to return to pre-pandemic levels by the end of the year, and will most likely result in year-over-year declines for human services nonprofits. Van Dyke believes many human services organizations will continue to feel some strain as some of the long-lasting financial effects of the pandemic, such as an increased need in rental assistance, become apparent.

“We administered [Kent] county’s CARES Act dollars, and now we are administering the federal COVID emergency rental assistance program. It’s a testament to the need that’s still out there,” Van Dyke said. “We have about $40 million in rental assistance, and we are giving about $400,000 to $500,000 a week in assistance. The needs are great, and it will just continue.”

As more donors contributed to emergency causes last year, the number of small donations increased. The number of donations between $101 and $500 increased by 11 percent last year, which was a large contributing factor to the 1.3-percent top-line gain in donors overall. In contrast, mid-size and major donations — from $501 to $50,000 — decreased in 2020.

“The long-term trend had been for fewer families to donate a greater and greater percentage of all the dollars that constitute charitable giving in the U.S,” Layton said. “And there was a lot of concern about what that meant. Just as the distribution of wealth in our economy is becoming more and more unequal, so too was the philanthropic universe being increasingly dominated by bigger and bigger donors. The fact that there was an uptick (in small donations) this past year I think represents a really exciting opportunity.”

While donations of more than $50,000 saw the most year-over-year growth, this was mostly because of initial responses to the pandemic as large donations declined year over year, according to the report.

As giving trends return to pre-pandemic levels and small donations are expected to decrease, Layton still sees an opportunity for nonprofits to focus more on attracting this specific demographic.

“The challenge for nonprofits now is we’ve had this big surge and connected with a lot of new donors, engaged especially with smaller donors,” Layton said. “How do we maintain that momentum?”

Donor retention will be critical

Giving Tuesday report authors urge nonprofits to emphasize donor retention in 2021 through ongoing engagement to leverage the rise in the number of donors in 2020.

Marilyn Zack, vice president of development for the Grand Rapids Community Foundation, said donor retention is a “big issue for us, and we spend a lot of time connecting with our donor partners and making sure they understand how much we appreciate their support.”

“We operate under the assumption that it’s a lot more effective and efficient to maintain donor relationships once they’ve been established rather than to be constantly involved in that churn of attracting new donors,” Zack added.

Giving Tuesday researchers expect donor retention to drop significantly in 2021, specifically for human services. Heart of West Michigan United Way plans to combat the expected drop through regular contact with donors and offering opportunities for donors to get involved with volunteer work.

“For the most part they really want to have an impact in the community, so for us it’s about communicating that impact,” Van Dyke said. “It’s allowing our donors to get engaged in volunteer opportunities so that they really get the hands-on connection to the work that we’re doing. All of that helps to retain donors by making sure they understand the impact and making sure that they can engage with the mission.”

Nonprofits rely on both restricted and unrestricted funding from donors that determine whether contributions must be used for specific causes or uses within the organizations. Though the Giving Tuesday report doesn’t differentiate between the two types of funding when analyzing 2020 donations, it shows that much of the giving last year was to meet emergent needs in communities. That includes pandemic response and addressing racial injustice.

“In trust-based philanthropy the idea is that grantmakers and foundations should not be so heavy handed in how they make grants with lots of strings attached in terms of what it takes to apply or what you’re expected to report on afterwards,” Layton said. “Instead, if they identify nonprofits working in an area they’re concerned about, they should trust those nonprofits, and kind of strip down and simplify the procedures for applying for grants and reporting requirements afterwards in an effort to allow those nonprofits to focus on the work, and not so much the red tape and bureaucracy.”

In 2020, Heart of West Michigan United Way raised $3.3 million in unrestricted funds that it could then flexibly allocate to nonprofits. Van Dyke said this flexibility allowed the organization to quickly respond to community and nonprofit needs.

“Many of them were very small nonprofits that wouldn’t have been able to do any kind of fundraising for their efforts,” Van Dyke said. “That was really important, and United Way has the procedures and the systems in place to be able to do this work and very quickly get the funds into the hands of the nonprofits who needed it to meet the emergency needs of their clients.”

Optimism for arts and culture

As fundraising returns to pre-pandemic levels, experts say arts and culture organizations that saw a sharp drop in donations last year will likely benefit. These organizations and their venues were largely closed during the pandemic in 2020, which caused steep declines in ticket sales and gift shop sales that many organizations rely on for revenue.

Layton agrees that the forecast looks much more positive for arts and culture organizations moving forward.

“I think it would be pretty shocking if, as people went back to theaters and started enjoying performances and art and museums again, that people wouldn’t be opening their wallets and checkbooks and credit cards and supporting those organizations again,” Layton said. “I think those are very safe bets, but the question is how quickly and how strongly the arts and culture organizations rebound.”